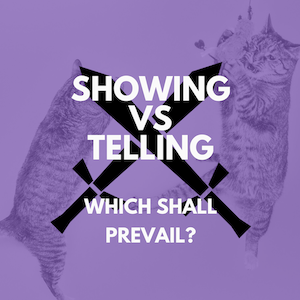 In writing, “show, don’t tell” is a frequently touted maxim, probably because the CIA pushed it into prestigious writing communities like the Iowa Writer’s Workshop and the Paris Review, and they, in turn, spread it as an unbreakable literary law. (Citations Needed covers this more deeply in their podcast, episode 144.) But unless you only want to write stories that center individualism, it is not a perfect solution in every situation. Showing is just one option in a box of many writing tools that all have different powers and purposes. Telling is another tool that is just as important, if not more so, because it assists with narrative, worldbuilding, voice, and more.

So when is it a good idea to tell rather than show?

To Alter the Flow of Time

Sometimes stories are told over the course of a day, with all the fiddly bits described. Other times, they jump across time—days, weeks, months, and even years—and this can be cued to your reader with telling.

A single sentence can be an adequate cue to let your reader know the timeline has changed. These time skips move over dead periods in your story that you don’t want to cover in the narrative, thus escalating the plot forward.

You can also use telling to speed things up or slow things down, or even change focus within your narrative.

For example, compare these two passages:

“Malfoy dove for the package, knocking it free from Harry’s hands before tackling him to the ground. They tussled, with Harry pulling Malfoy’s hair and Malfoy punching Harry in the throat before Mayfoy finally got the package in his hands.”

“Malfoy seized the package and felt it. “That’s a broomstick,’ he said, throwing it back to Harry with a mixture of jealousy and spite on his face. ‘You’ll be in for it this time, Potter…’”

Notice how quickly, in the second version, the focus of “Will Malfoy get the package from Harry?” is supplanted with a new focus, “What will Malfoy do now that he knows the package is a broomstick?”

These two passages differ in feel and focus, and those differences can be used to highlight different elements in the story. The first one prioritizes the fight itself and the second one prioritizes Malfoy getting the knowledge that Harry has received a broomstick, thus goading his envy and heightening their rivalry. Contrarily, the first example takes up more narrative space to allow for a fight, choreography, and even humor. Telling and showing can both be valuable choices, and it is up to you, the author, to figure out which elements you want to highlight in each of your scenes.

To Give Broad Strokes of Information Quickly

If you’ve ever seen Star Wars, you’re familiar with the opening crawl, in which they lay out the general conflicts and players in the galaxy. That’s telling, not showing. And it didn’t cause the death of Star Wars, financially or artistically. (Take that, Show-ers!)

Other works also use brief “info dumps” to pack a punch in terms of world setting, or in “what happened last time.” If you’ve ever seen an episodic TV show like Star Trek or Supernatural, you’ll know what I’m talking about.

To Catch Readers Up on Previous Books

Serial novels, such as the Harry Potter series, also have to catch readers up on events that happened in previous books. When writing a sequel, the author assumes that readers have either read the previous novel, or are jumping into the sequel blind. In either case, the author best assists their reader by using telling (rather than showing) to provide a quick summation of what happened in previous books. If they had to show it, they’d have to just write the first book all over again.

“Ever since Harry had come home for the summer holidays, Uncle Vernon had been treating him like a bomb that might go off at any moment, because Harry Potter wasn’t a normal boy. As a matter of fact, he was as not normal as it is possible to be.

Harry Potter was a wizard—a wizard fresh from his first year at Hogwarts School of Witchcraft and Wizardry.”

—Harry Potter and the Chamber of Secrets, p3

Fairy tales have a perfunctory storytelling style. Once there was a great king… and then a great plague of darkness covered the land… If, in your own writing, you want to mimic this style or cue your readers into this sort of magical, just-so mindset, telling may be the way to go. The Hazel Wood does this frequently, due to the nature of its premise—that the main character was raised on fairy tales.

“My mother and I had spent our lives as bad luck guests. We moved at least twice a year and sometimes more, but the bad luck always found us.”

To Write for a Younger Audience

When writing for children, whether in a picture book, chapter book, or middle grade, it can be useful to not beat around the bush with your words by showing. In children’s stories, you are limited to a very short wordcount, so to convey ideas with speed, you are required frequently to tell rather than show.

“Edwick and Calico had spent many years patrolling the lakes, rivers, streams, and swamps of Dinotopia. It was their job to monitor all the freshwater on the island, including geysers.”

“On her first day at the academy, each pupil was given a broomstick and taught to ride it, which takes quite a long time and isn’t nearly as easy as it looks.”

Both of these examples fill the reader in quickly as to what’s been going on and how things are done in the world of the story—much more quickly than if the authors had attempted to show these things with full scenes rather than tell them. When accommodating short attention spans (as with children), using such expedited language can help you get right to the story. And there’s nothing wrong with using the same technique in adult stories, either, if you’re doing it with intention.

“My mom and I lived like vagrants, staying with friends till our welcome wore through at the elbows, perching in precarious places, then moving on. We didn’t have the luxury of being nostalgic. We didn’t have a chance to stand still.”

To Let an Inexperienced Audience in on a Cultural Facet

Like I said at the beginning of this post, the origin of “show, don’t tell” is a bit nefarious. You’ve got the CIA coming in and creating this narrative of individualism at the expense of the communal, and it shows. The reason why some people think “show don’t tell” works is because they think all literature should be in a “universal” world, where all of the cultural elements are known, and therefore don’t need to be expressly stated. How else could they only show and not tell? In the Western world, that “universal” world is generally that of the caucasian man, and specifically one who lived in the mid-20th century.

Cecilia Tan covers this in her insightful op-ed, Let Me Tell You:

“[The literary elite] established the rules for modern fiction under the assumption that their experience was ‘universal’… [They wrote] for an audience that shared so many assumptions with them that the audience would feel that those settings and stories were ‘universal.’”

“[D]enigrating descriptions of daily living and material culture… judges these details as unworthy of narrative in the same way colonialism, racism, and sexism dismiss [lived experience].”

—Kate Elliot, “The Status Quo Does Not Need Worldbuilding” at Tor, 2013

In the States, the only writers who can show without telling are writers in groups that hold power (i.e. white, male, cishet, Christian, fully abled). They call their world universal and criticize people who don’t write within it, but for many that “universal” world is not their lived experience.

A queer, disabled person with nonwhite heritage might need to use telling as a tool to differentiate the world of their story from the “universal” milquetoast world. They might need to explain colors that represent different sexual preferences, ways that accessibility is limited in public buildings, or miscellaneous rituals and holidays that they celebrate. This is only one example in a vast spectrum and hierarchy of different types of people who might need to tell in order to explain their world.

These examples are not an exhaustive list of when telling functions better than showing, but I hope they act as a fulfilling spread of instances in which writers should use telling versus showing.

Writing, like all forms of art, is the amalgamation of a vast array of skills, from listening and reading to analyzing and mentalizing. With these skills comes the knowledge of tools and the wisdom of when to use them. There’s nothing wrong with showing, obviously, but it should not be the only tool in your toolbox, as it is not the best solution to every problem. It is much more difficult to screw in screws with a hammer than it is with a screwdriver.

When do you use telling rather than showing? Are there ways it is more efficient or striking than showing would be?